Here's the deployment map I've decided on for my Battle of Brunanburh project this year. After reading a few different texts on the subject I've decided to lean heavily on Ian Heath's description in WRG Armis of the Dark ages, while also adding a splash of other opinions in regards to terrain/location and size etc.
Both armies form up as follows; The Mercians and a small contingent of Norse mercenaries on the left facing the Scots & Welsh, and on the right is King Athelstan's forces facing the Norse Irish/Vikings under the command of Olaf Guthfrithsson. 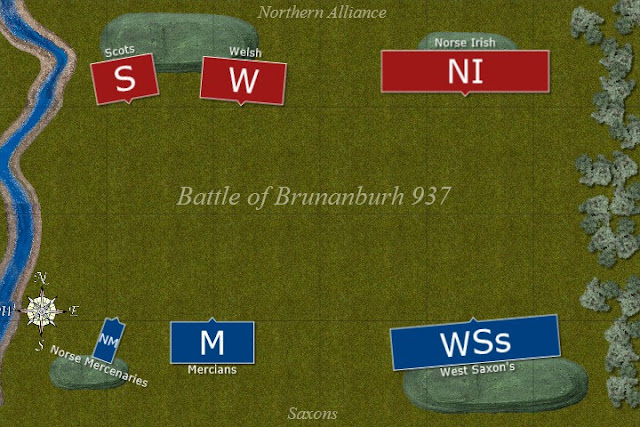 Some source's say the forces where facing the opposite opponents than listed above (Mercians v Norse Irish, West vs Scots &welsh etc), but I'm happy with what we've decided on and cant wait until we can fight this out on the table! After all not a great deal is known about this particularly bloody battle.

I've got to finalise the Army lists with Gavin for both Impetus and Piquet (and for a lighter game perhaps Kings of War) and will post them upon completion.

At the moment I have pretty much purchased all the mini's for my Saxons which are a mix of Black Tree, Crusader, Foundry and Musketeer, all of which mix very well together.

More progress to come over the next few weeks.

Email ThisBlogThis!Share to TwitterShare to FacebookShare to Pinterest
Labels: Brunanburh