After a busy few weeks at work I decided i'd pick up the new X-Wing miniatures game from Fantasy Flight to play with the Wife and Kids. The Box and Contents are all of really good quality; The Cards, Miniatures and all components are sturdy and will last for the long run in our house (where the kids can get a little rough!)

We jumped straight into the Quick start rules to get a feel for the system. Those that have played Wings of War will be familiar with the absolute basics and will pick up X-Wing with ease. The Quick start rules give nice and fast action and are really fun. My Wife and I will be playing the full rules tonight and a couple of games thoughout the week which i'm looking forward to.

A few action shots of the game my Son (Imperials) and I (Rebels) had. 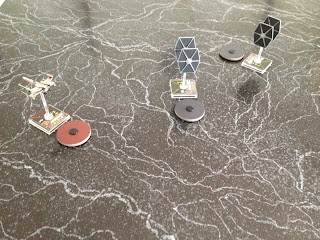 It was a shaky start for the 'Rookie' X-wing Pilot with the two TIE Fighters moving in quick. 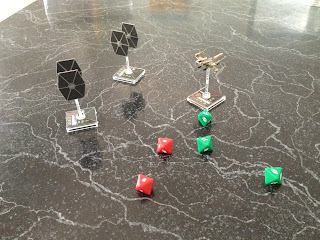 The TIE Fighters stuck on the X-Wing bringing his Shields offline and damaging the Hull. 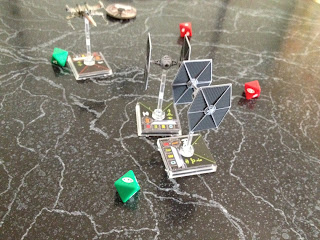 WIth a daring Immelman, the X-Wing caught the TIE fighters off guard and managed to blast one out of existence and turn the tide. 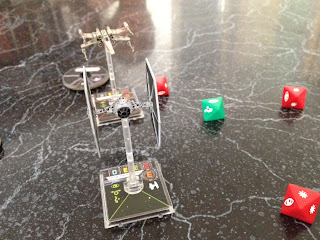 As the remaining TIE Fighter turned to regather the 'Rookie' kept on his 6 and took him out with a well aimed blast.

This particular game took about 20 minutes and even though the young bloke was defeated he was keen to jump straight into another game for some fast paced action!
Posted by Nate at 2:05 pm No comments: